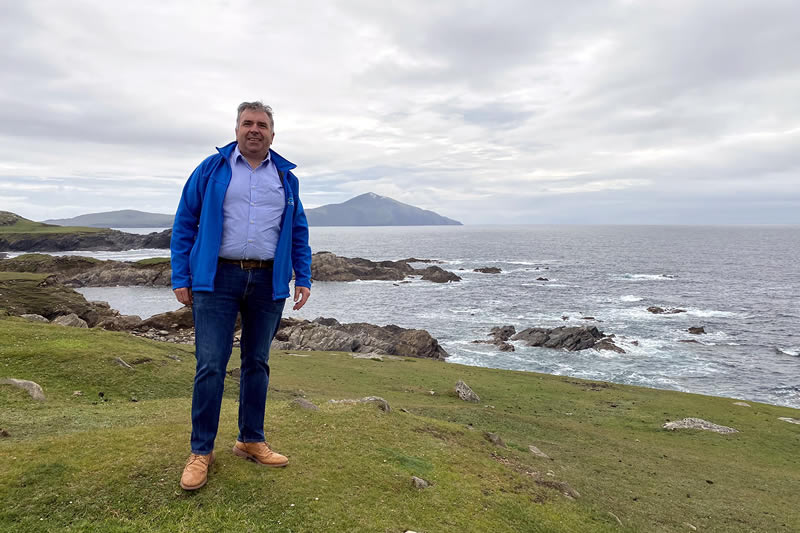 The reopening of Achill to visitors following the latest easing of COVID-19 restrictions was featured in two special reports on RTÉ Radio One’s flagship Morning Ireland show this morning (1st July). Reporter Cian McCormack presented two segments, the first of which looked at Irish Tourism in a Time of Pandemic.

In this first report he interviewed Roisin Lavelle of Teach Cruachán B&B and Achill Bikes bicycle hire who spoke about the lifting of restrictions has brought some light to the end of the lockdown tunnel. Also interviewed was Chris McCarthy, Manager of Achill Tourism, who agreed that bringing forward the lifting of restrictions has brought some hope to local businesses and providers. He said, “its a shorter season now as we’re into July but we hope to extend events out to September and October. We have lots of events planned for those months including the Tour de Achill cycling event, the Achill Half Marathon, the Battle for the Lake windsurfing festival and a number of musical and cultural events to take place in a different type of setting.” Asked about the work that Achill Tourism did in co-ordinating the 250-strong volunteer community response at the height of the pandemic – an initiative previously reported by Cian McCormack – Chris confirmed that help was still being provided to those still cocooning, but that “tourism is the lifeblood of the economy in Achill” and this would be Achill Tourism’s main focus now. Asked about the dangers of large numbers of visitors to Achill having an impact on COVID-19, McCarthy said “we have responsible business owners and providers who have taken major steps in the safety of visitors and tourists. If we all adhere to the rules we’ll make sure that everybody is safe here in Achill”.

Listen to first report: Irish Tourism in the Time of a Pandemic

In the second report Cian reported on Achill Seal Caves Caravan & Camping Site where he interviewed a number of Irish families who have ditched the idea of heading abroad for the sun. The Finn family from Co. Roscommon, who usually holiday in Portugal, said their children by far one of their favourite holidays for the freedom it offered, and that they would definitely be back next year. The Townsend family, whose last holiday was in Dubai, decided to stay in Ireland due to COVID-19 and were struck by the beauty of Achill when they arrived. Lorraine McHugh, owner of the Seal Caves Caravan & Camping site, commented that visitors arriving were so happy to be out and travelling as most had not left home since St. Patrick’s Day. She revealed that the park is almost fully booked until late August with mostly Irish families, and that many were staying longer than usual. Lorraine continued, “because they’ll be here for longer they’ll be able to do more. In Achill there’s so much to do you wouldn’t fit it into a day or two. You climb Slievemore mountain and go to the beach, that’s one day gone. You go cycling that’s another day gone. You’re crab fishing, you’re playing football, you’re kayaking – you need a long time in Achill to experience the best parts of it.” Also interviewed was Ann Connor, Tourism Officer for Mayo County Council who spoke about initiatives to help keep people local in the county and how a series of smaller festivals is planned.