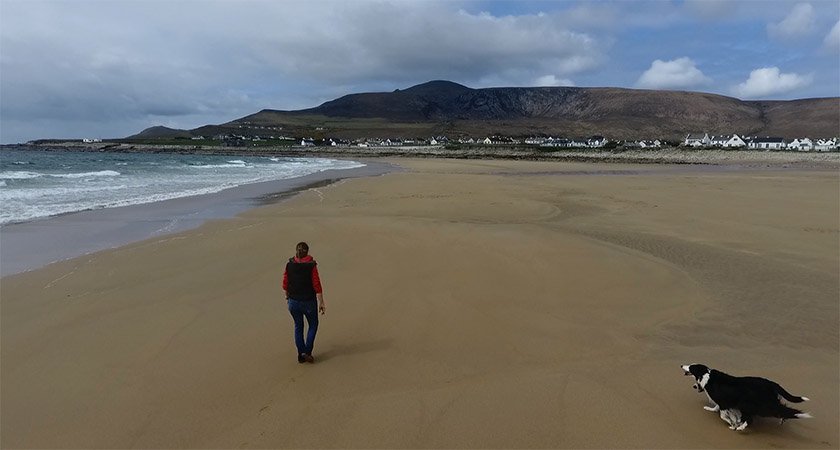 Achill Island has a new beach for 2017! For the first time since 1984, an extensive sandy beach has returned to Dooagh Bay. Just in time for the start of the summer season, the ocean has deposited thousands of tons of sand onto the formerly rocky ‘beach’. Now that the high Spring Tides have passed, it is expected that the new sandy beach will remain in place for summer 2017. The amazing reappearing beach has been reported worldwide, including the BBC, ITV and CNN. Scroll down for links to full stories, images and video.

Why beaches lose their sand – and then suddenly reappear – academic explanation for the magical reappearing beach in Dooagh.

English novelist Graham Greene shared a cottage hideaway in Dooagh with his mistress, the American Catherine Walston, in the 1940s. Greene wrote parts of the novels The Heart of the Matter and The Fallen Idol while in Dooagh.

The headland on the east side of Dooagh Bay, Gob Ellainne, is where the painter Paul Henry stood in 1910 and tore up his return train ticket to London, vowing to stay in Achill: “As I wandered round … and looked down on Dooagh and to the noble cliffs of Achill Head, I felt that here I must stay somehow or another. I would not go any further”.

Achill Island continues to inspire artists and writers. Painter Camille Souter lives and works in Dooagh, and the island has many Galleries and Craft Shops showcasing the work of artists, sculptors and photographers.

Scoil Acla, one of Ireland’s oldest summer schools, was founded in Dooagh in 1910. Scoil Acla continues to provide tuition and performances in traditional Irish music, culture and arts. The summer 2017 programme runs from 22nd – 29th July.

In 2014 heavy storms exposed a shingle bank at Dooagh Beach which was investigated by archaeologists from the nearby Achill Archaeological Field School and found to contain a pony graveyard dating to the mid-19th century. See Dooagh Pony Graveyard (2014). The Achill Field School is Ireland’s longest-running archaeology field school and offers tours and introductory courses as well as accredited courses for undergraduate students.

In former times, the same spring storms that revealed the beach in 2017 and shingle bank in 2014, would regularly rip seaweed and wrack from the seabed and deposit it onto the beach. On such occasions, a bugle would be sounded to notify villagers and the wrack would be divided to be used as fertilizer in the surrounding fields. Today, seaweed from Achill’s Atlantic waters is used at Achill Seaweed Baths and also as an ingredient in the new Achill beer from Achill Island Brewery. The bugle is now used to signal the start of currach races at the annual Dooagh Day festival.

Achill Island already boasts five Blue Flag beaches plus one more at nearby Mulranny but it is hoped that the pristine sand at Dooagh may become the island’s sixth Blue Flag beach.