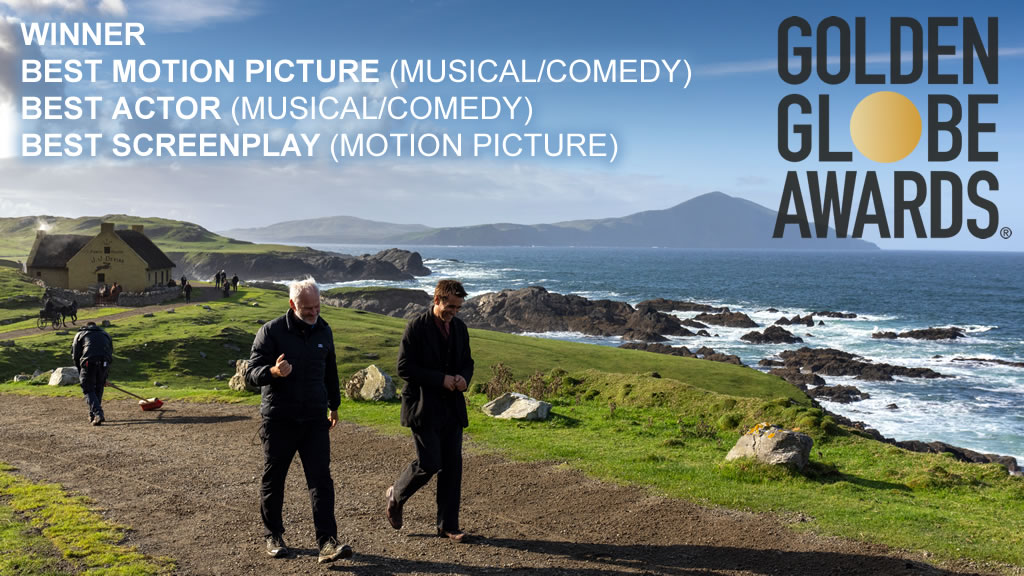 The movie ‘The Banshees of Inisherin’, which was filmed extensively on location on Achill Island, has won three Golden Globe awards. The film, parts of which were also shot on location on Inis Mór island, in Co. Galway, won Best Motion Picture in the Musical or Comedy category. Colin Farrell, who starred as Pádraic Súilleabháin, won Best Performance by an Actor in the Musical or Comedy category; and writer / director Martin McDonagh was awarded Best Screenplay in the Motion Picture category.

On receiving his award, Colin Farrell thanked his cast and crew but went on praise the people of Achill and Inis Mór for hosting the production. He said, “I want to thank the locals of Inis Mor and Achill Island that brought us in, and there were lines blurred between all of us so that we were just one big family for the betterment of all of our souls on that experience.”

During filming Farrell was often to be seen jogging on the roads of Achill, even changing on-set to run several kilometres back to the location HQ after filming. Though one local did manage to snap a selfie with the actor while shopping in the local supermarket, causing quite a stir with his choice of cuisine.

Reporting on the Golden Globe nominations and awards for the RTÉ Morning Ireland radio show, Sinéad Crowley, RTÉ Arts & Media Correspondent, praised the cinematography and spoke about the tourism potential for the locations. She said, “it is a stunning film, whether you see it on the big or the small screen – and it is obviously better on a big screen – but it is stunning, it is John Hinde postcard in places, it is really beautiful so I imagine that yes, now is the time to capitalise on it for anyone in that neck of the woods.”

Later on the Morning Ireland show, Chris McCarthy, manager of Achill Tourism, spoke about the excitement within his office and the wider tourism sector in Achill for the publicity the film is bringing. He said, “you cannot buy this type of exposure. We are lucky that Achill has retained its old world heritage and charm and traditions. While Jenny the Donkey has moved on from Achill, the scenery and the rocks and the sea are still here.” Speaking about the reaction to the film and the Golden Globe awards, he praised the people of Achill for their contribution to the production: “It certainly has a lot to do with the people of Achill and how they opened their arms and welcomed the stars. In fairness to Colin Farrell, he gave great plaudits to the community of Achill.”

Asked about the recent call by Taylor Swift, the multi-award winning singer-songwriter, for the pub set created for the movie to be rebuilt (see Taylor Swift Wants Banshees Pub on Achill Island to be Rebuilt), McCarthy quipped, “who am I to argue with Taylor Swift? But I would like her to know there are 13 other pubs on the island and there are characters in them all. You’ll find the best chowder and Guinness in all of Ireland in Achill.” Asked whether he had invited her over, McCarthy said, “Of course we have invited her! But she’s a star and hasn’t said yea or nay yet”.

McCarthy also spoke about how Achill plans to benefit long term from the interest in the film, with a Banshees of Inisherin Locations Trail already launched online. Achill Tourism is working with Mayo County Council, Failte Ireland and the Wild Atlantic Way to provide physical infrastructure at the locations on the trail.

Filming on Achill Island took place at six main locations during late summer 2021. These include Jonjo’s pub at Cloughmore; the harbourside village and O’Riordan’s Post Office at Purteen Harbour; Corrymore Lake, which was the location for Mrs. McCormack’s cottage as well as two of the most moving scenes in the film; the cottage of Colm Doherty (Brendan Gleeson) at Keem Bay; and the church (St. Thomas’s in Dugort) that was used for a Mass scene and Colm’s confessions.