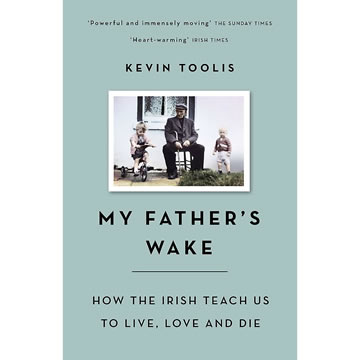 BAFTA winning film maker, playwright, director and writer Kevin Toolis, whose father hails from Achill, launches his book ‘My Father’s Wake – How the Irish Teach Us to Live, Love and Die’ in Ted’s Bar, Cashel, at 7.30 on Wednesday 25th October 2017.

On a remote Irish island, close to shore, at the bedside of a dying man, in the company of the mná caointe, with the sound of the rosary booming off the ceiling, I felt both the revelation and the burden of My Father’s Wake descend on my shoulders. I saw a way of dealing with death that dwelt amongst us as far back as the fall of Troy, long before the blinding of our Western Death Machine. My task was to help with the remembering.

In my all death hunting, I have been often graced by the kindness, generosity and painful heart-exposed honesty of hundreds of other lives. I hope the words here offered will be a reward for the time vested in a passing stranger and my debt in some measure repaid. Now my work is done. My promise, to the best of my ability, fulfilled and the work of others begun – to judge these words and journeys amongst the living and the dead and act upon them if they so wish.

May you too find in death the same grace I found in my father’s wake.

Kevin Toolis is the writer of My Father’s Wake: How the Irish Teach us to Live, Love and Die.

Toolis is a BAFTA winning film maker, playwright, director and the founder of manyriversfilms.

Toolis is the author of a classic account of the Irish Troubles Rebel Hearts: Journeys Within the IRA’s Soul, a study of the IRA.