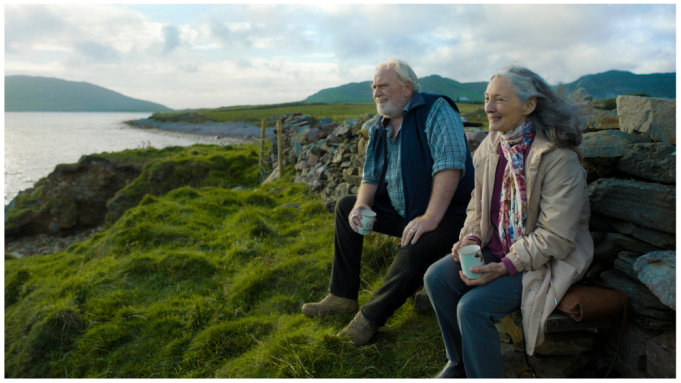 The independent movie My Sailor, My Love, which was filmed on location in Achill, had its world premiere at the Toronto International Film Festival (TIFF) this week. Amid a raft of positive reviews, it was also announced that German-based distributors Global Screen has stuck a deal with Signature Entertainment for distribution in the UK and Ireland, with the film likely to be released here in early 2023.

Speaking about the deal, Katie Wilkinson of Signature Entertainment, said: “Signature were instantly charmed by My Sailor, My Love and it’s always a pleasure to support and champion Irish content. We were all won over by the heartfelt story, amazing performances and the breathtaking scenery of the Emerald Isle featured in the film. We are planning a theatrical release in early 2023 and really look forward to bringing this deeply moving and layered story to audiences.”

My Sailor, My Love was filmed on Achill Island and the Currane Peninsula in the summer of 2021, coincidentally at the same time that Martin McDonagh’s The Banshees of Inisherin was filming on Achill. It is the English-language debut of Finnish director Klaus Härö, whose 2015 film The Fencer was nominated for the Golden Globes as well as Oscar shortlisted in the Best Foreign Film category. It stars Scots actor James Cosmo and Ireland’s Bríd Brennan and Catherine Walker in a later-life love story involving a retired sea captain and a widowed housekeeper, and the impact it has on his adult children.

Reviewing the movie at the Toronto festival, Reel News Daily headlined that it “boasts beautifully complex performances”. It went on to praise the two lead actors: “This endearing later-stage love story is as lovely as can be. Annie and Howard’s earnest chemistry come to life with the extraordinary performances by James Cosmo and Bríd Brennan.” And went on to conclude: “The thoughtful cinematography by Robert Nordström includes breathtaking ariel views and impactful tracking shots. The care and intention are impossible to miss. My Sailor, My Love will capture the hearts of TIFF22 audiences.”